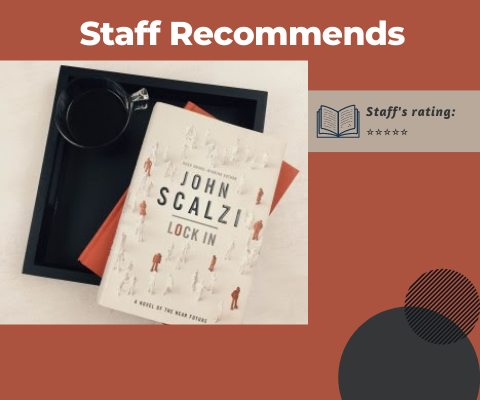 John Scalzi’s Lock In, written in 2013, seems oddly prescient, particularly as we come to the close of the second year of the COVID-19 pandemic and are still struggling to understand the longer-term neurological effects of the virus. In this near future science fiction whodunit, a viral epidemic has struck the globe. While most only exhibit flu symptoms, an unfortunate one percent, including about 4.5 million Americans, experience permanent “Lock In” symptoms, where victims are fully aware, but unable to move or respond to external stimulus. The world adapts to what later becomes known as Haden’s Syndrome, creating the Agora, a three dimensional social network for those afflicted as well as “threeps,” robot bodies named after C-3P0 so that they can engage with the physical world.

The novel follows Chris Shane, a rookie FBI agent who has Haden’s syndrome, and his partner, veteran agent Leslie Vann, as they inspect a Haden-related murder at the Watergate Hotel. I won’t delve into the twists and turns because I don’t want to spoil your experience, but this was a unique, engrossing, and highly bingeable near-future murder mystery.